In April 2011 I joined the Macclesfield Creative Writing Group, a new writer’s group in my hometown. Over the last years I have written various snippets of prose that have arisen from the writing bursts we embark upon each week. I used to find writing freely for fifteen minutes incredibly difficult and one week in a burst of inspiration I started one of the writing bursts with the line, ‘Our Doris has developed an unhealthy obsession with slugs’ and wrote a page about a long-suffering husband who is relating his experiences in the form of a dramatic monologue. Over the next few weeks I began to write about Doris and her husband as she went about her day-to-day life, usually with the story relating to the writing burst we were given that week.

Doris grew into a character similar to Hyacinth Bucket with more curse words and the wherewithal to throw dictionaries at reporters who don’t stay on topic. A regular cast of characters grew and as time went on I had created an entire village of characters. These characters stick in my head like family as I remember each story they’ve related through Doris.

The first flash monologue was published in the group’s anthology Macc Writes back in 2012. Bread can be viewed on Youtube, and on this blog. Since that first monologue, I have performed more monologues around Cheshire, at chapels and libraries, Seven Miles Out in Stockport and most recently at Knutsford Library as part of their Writer’s Forum where I shared the floor with Madeleine Keefe, Mollie Blake, Zara Stoneley and Joy Winkler.

Now after almost four years of living with these characters, I am exceptionally pleased to announce that Our Doris will be a book.

In summer 2015, you will be able to read all about Doris’s endeavours to become fifth house in the local garden safari. You’ll get to meet Violet Grey, husband to the philandering Doug Grey. Doris’s mortal enemy, Janice Dooley of Little Street. And at the heart of it all you’ll meet ‘arold, the gentleman who tells of his wife’s endeavours; after fifty years he’s got a bit of an idea how to deal with her.

The monologues have been expanded, characters have been added and the plot has grown beyond anything I could have hoped for when I first wrote that paragraph of ‘Slugs’ back in 2011.

The book will be available to purchase via www.variousaltitudes.com and from certain independent book shops throughout Cheshire. Closer to the time of publication, I will hold readings where you’ll hear the monologues in action and have the opportunity to buy the book there and then.

Next week I will write about my decision to self-publish the book, but for now I want you to know that I am incredibly excited for the future. I hope that you all enjoy Our Doris because although the book has been difficult at times, and I have worried about my own skills, and despite the fact that life can so often get in the way, it has been an absolute pleasure to write.

Until next time that is all. 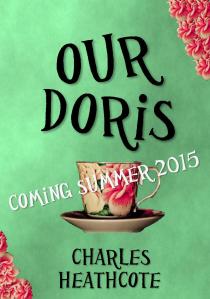